Mousekepros is headed back to Walt Disney World. This trip will minimally include a resort that we’ve never stayed at and two restaurants where we’ve never dined. We have a few Mousekepros Travel clients traveling at the same time as us, as well as many myMousekepros subscribers who will also be in the parks.

We are excited that the park hours just got extended for this week! We will certainly record some video and may even do a few Facebook live streams. For those interested, here is our itinerary.

It’s hard to believe that Disney’s Coronado Springs Resort has been open for almost 25 years and we’ve never stayed there. Our moderate resort of choice was always Port Orleans and never looked to stay anywhere else. Our reservation is in the Gran Destino Tower which opened in 2019 and provides wonderful views of the property. Unfortunately Toledo has not re-opened, but I am interested in trying Three Bridges and seeing how that compares to Geyser Point at Wilderness Lodge.

It’s been a long time since our family has spent time at Disney Springs. I think the last time we were there was just for a quick bit at Chicken Guy and a last walk through of World of Disney. While I’m sure I will be persuaded for lunch at Chicken Guy, we do have dinner reservations at the BOATHOUSE which will be a new experience for us.

One member of our traveling group has not been back to Walt Disney World since Galaxy’s Edge opened, and obviously hasn’t ridden Mickey and Minnie’s Runaway Railway. So you can bet that our first stop is going to be the pair of Smuggler’s Run and Rise of the Resistance. We are still waiting for the Dining Tool to find us a spot at Oga’s Cantina, and other dining is still to be determined.

I’m thinking that we will do a quick service lunch at Satu’li Canteen as it is one of my favorite quick service meals and the others in my group have never eaten there. I also have a dinner reservation for Tiffins Restaurant which I’ve been wanting to try for a few years.

I made a reservation for one of our non-park favorites Trattoria al Forno. While the characters won’t be making their rounds, we all have really enjoyed the food both at breakfast and at dinner. I’m still trying to secure dinner reservations, but with Epcot open until 11pm, we may venture outside the park if we can’t get our beloved Le Cellier.

Call me a sentimental fool, but I always love ending our vacations at Magic Kingdom. We haven’t decided on dining here yet, but after missing out on the best attraction in any park the last two trips, we will certainly not be missing Jungle Cruise this time around.

Friday March 25, To Be Determined

It’s the first time in a long time that our entire group doesn’t have annual passes. For now, we just have four day non park-hoppers for my companions, but if there’s something we miss or want to do again, we may add on. I think it’s likely we could end up at Hollywood Studios… or perhaps we will start and end this trip at Chicken Guy. 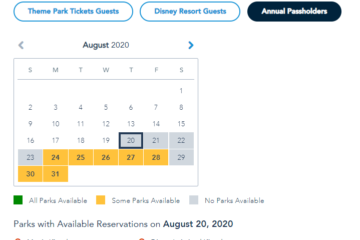 I’ve tried many different scenarios using the my Mousekepros Park Pass Procurement tool, but today I decided to try something new. Which of the four parks could I get a same day (yes, for TODAY) Read more…