After staying at Pop Century for my last two trips, I was a little nervous about staying at one of the All-Stars for the Runaway Railway trip. All of the Pop rooms have been refurbished and the convenience of the Skyliner to two parks is a really incredible benefit at a value resort.

Originally I had a room booked at All Star Movies (all of the rooms there have now been renovated), but since I hadn’t stayed at Music in several years (and that was a family suite), I wanted to give this one a try. Besides, with the annual passholder discount my cost was $385.17 for two nights including the quick service dining plan. This resort has just started it’s renovations, so there was no guarantee that I was going to get a newly decorated room. As a reference, here is the photo from the Disney website showing the Music rooms:

I made use of the TouringPlans.com “room request” feature to ask for a room in Calypso Building 10 (one that I knew refurbishment was complete) and not only was assigned to that building, but had an upgraded room on the pool side ground floor.

The refurbished rooms are in the same design and decor as Pop Century and All Star Movies. No carpeting and the removal of bulky furniture to make the room feel bigger than it is. Here are some photos of my king room:

I was definitely impressed with the clean look of the room. The rooms with double beds and cabinetry really made it feel cramped, but this room felt bigger than its actual size. I’m going to assume that the non-king rooms will have one queen and a pull-down queen like the other resort rooms that have received this treatment.

The flat screen TV was very large and there were not only USB outlets on the dresser, but also on the nightstand. I was charging batteries, phones and an iPad and had several outlets to spare.

The food court is very small here, especially compared to Pop Century. I never entered during a busy time, and in fact never ordered any food. I only used the cafeteria to fill my resort mug and do a little work. I also didn’t use the pool at all.

On the downside, the bus service at All Stars isn’t great. There are certain times of the day when a single bus services all three resorts. This can be frustrating as the bus may already be full when you (attempt to) board. On the positive side (as I discussed in the Movies resort review), depending on your building, you can take either the Movies or Music bus back to resort utilizing which ever arrives first.

For those who want to stay on property at the lowest rate, All Star Movies and Music aren’t a bad option. Movies is the better choice now based solely based on the fact that ALL rooms are refurbished. 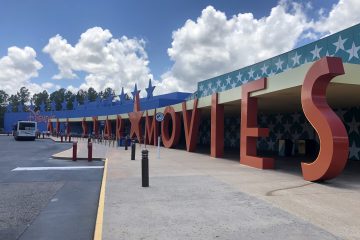 We had booked the All Star Movies with an annual pass holder discount rate of $126.85 (tax inclusive) two nights before our arrival. This was a one night booking in advance of meeting the rest Read more…